Part 1: Wealthy is as wealthy does

5 things you didn’t know about millionaires and why they’re important. Number 4 is a game changer! 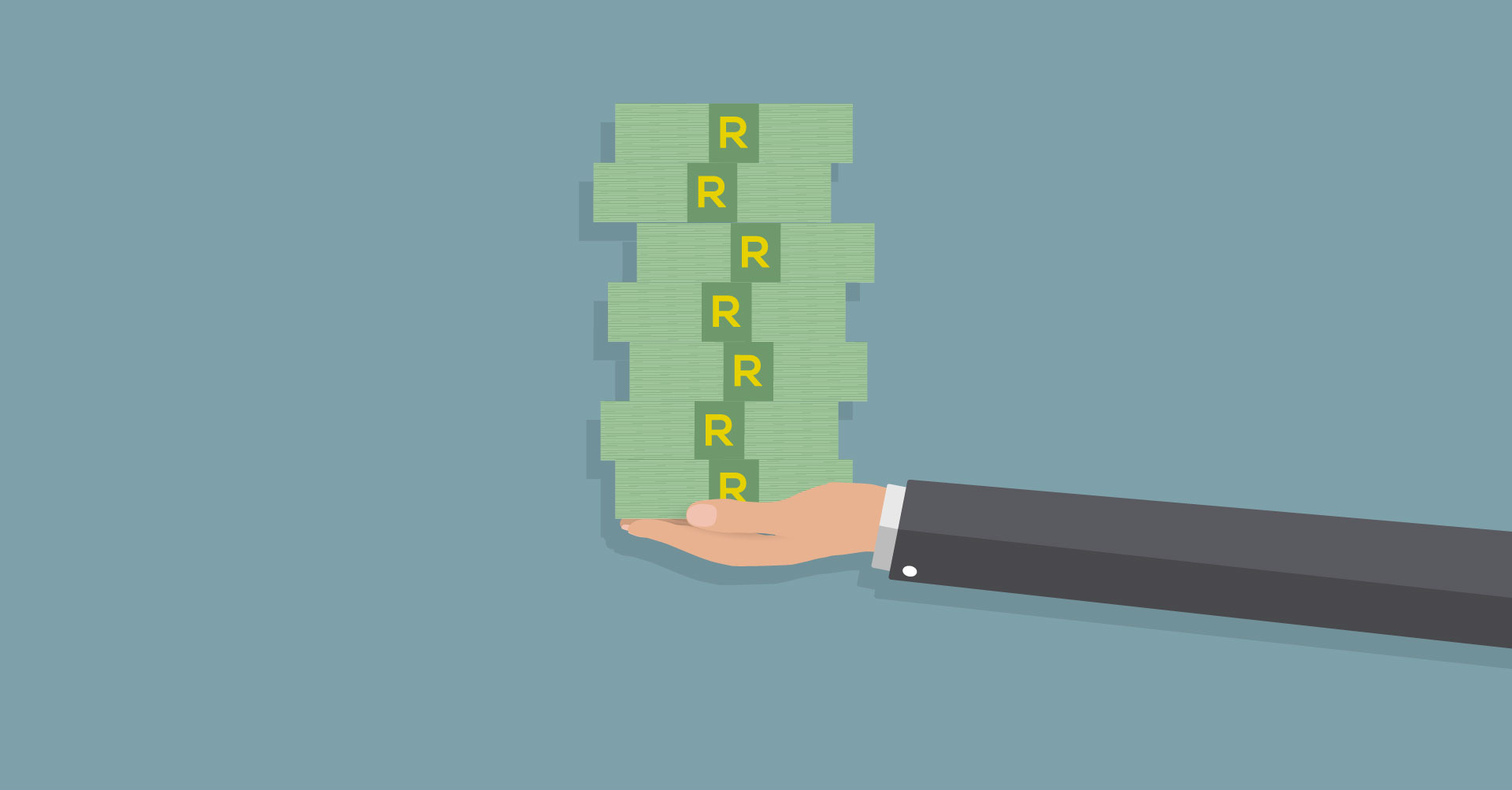 This is the first in a seven-part series on how South Africans can survive a tough economy and build wealth in the face of inflation and price increases.

1. They live within their meansYou know how when you get an increase at work, you tend to upgrade your lifestyle? You tell yourself that you’ve worked hard for that money, girl – you deserve it! Well you’re not alone. As we make more money, we spend more money. It’s a concept called lifestyle creep and everyone does it. Except for rich people. Here’s why:

A guy by the name of Thomas J Stanley wrote a book called The Millionaire Next Door after studying dollar-based millionaires for many years and people were surprised by his research. This is because he showed that the large majority of millionaires are people who don’t “look rich”. Basically, they’re normal people like you and I – teachers, accountants, plumbers and small business owners – who learned how to do one thing REALLY well when it comes to their money. They spend less than they earn.

Their reasoning is very simple. They figured out early on that if you keep your expenses lower than your income, you give yourself flexibility and choice as that’s what true financial independence is. It’s the option to live, work and play when and how YOU want to. On your terms. Sound appealing? Millionaires think so. That’s why they understand the direct link between their financial independence and spending less than they earn.

Get started: Instead of seeing your salary as your income or your pay cheque for your work over the past month, reposition it in your mind as your ‘future freedom’ and make your buying decisions through that lens going forward.

2. They have multiple streams of incomeMillionaires look for other ways to bring in moolah. Why? Because they understand the power of having money work for them. Of the choice that comes with more than one revenue line in your personal budget. And obviously, because they want to protect their downside. The reality is that nobody’s job – or business - is safe and having more than one source of income is a good way to mitigate these risks.

Know this: You can earn money (besides your salary) from shares, investment properties and a hobby or small business on the side.

3. They take responsibilityWarren Ingram is the South African-based author of the book called Become Your Own Financial Advisor: The Real Secrets to Becoming Financially Independent and he says that you must take responsibility for your own finances. Its human nature that if you give yourself a way out – you’ll take it.

“Procrastination around money is a many-sided evil. Sit down and get at least one thing done. Otherwise you’re guaranteeing that you and your family are going nowhere,” says Ingram.

Get started: Decide today on 1 thing – just ONE - that you need to do to start getting your financial affairs in order and make it non-negotiable that you get it done before the week is out. Next week, set yourself another challenge and so on.

4. Be prepared for emergenciesMillionaires have an emergency fund set aside for ‘rainy days’. Because they know there will come a time when there will be a crisis like an unexpected medical emergency or losing their job. And instead of relying on credit, they have money saved up to cover those nasty financial surprises.

Money Coach™ from The Money School, Gary Kayle, cannot emphasise enough the importance of such a fund for everyone. “Don’t kid yourself that there aren’t going to be any bumps on the road ahead. There will be. What’s important, is that you put in place an emergency fund – a financial shock absorber if you like – to smooth over those bumps.”

Start today: Your first goal is to start saving R10,000 towards your emergency fund. Thereafter, aim to have 3 months’ worth of your gross salary saved in case of emergencies.

5. They exerciseStat: >> 76% of wealthy people exercise aerobically four days a week. 23% of poor people do this.

Tom Corley is the author of a new book called Change Your Habits, Change Your Life where he shares the daily habits that helped 177 average people become self-made millionaires. One of these habits that he refers to is the exercise stat listed above and it’s a common thread amongst many experts – that people who understand the commitment to improving their physical fitness are often better equipped to do the same level of prioritisation when it comes to their financial wellness too. Anyone for a run?

Get started: See our ‘Rich List Talking Points’ below and discuss the 5 other daily habits that wealthy people do in their homes, with your family and see what you could do in your home, together, on your journey towards financial independence. 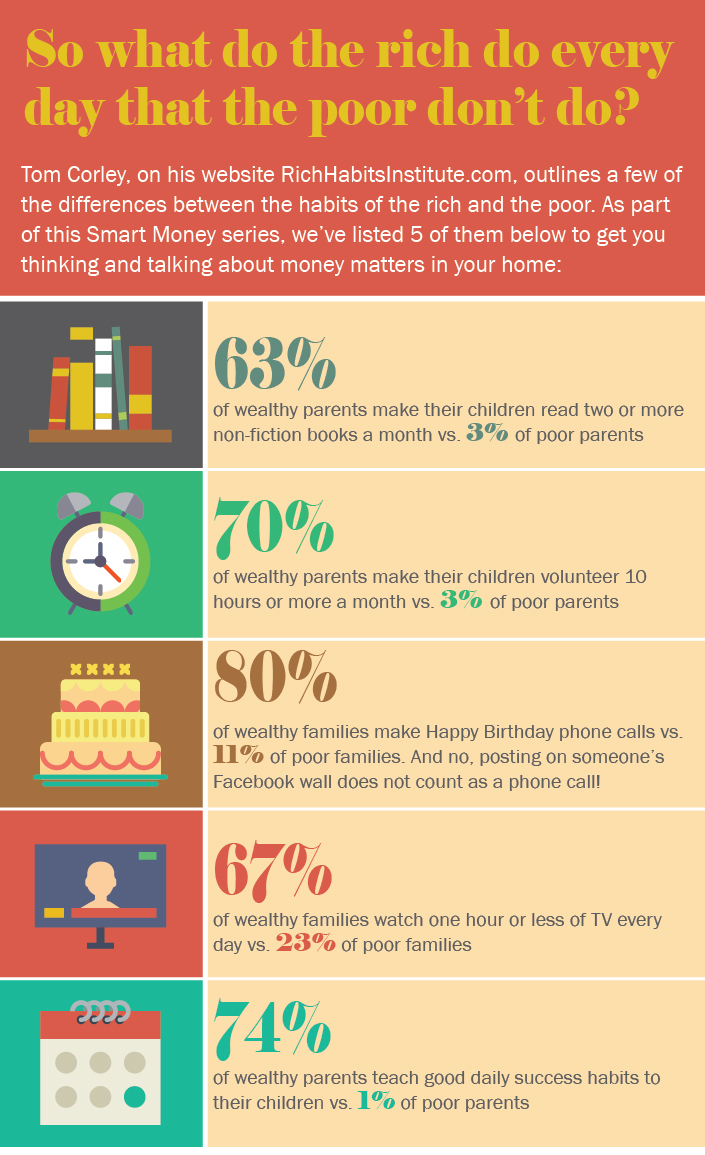